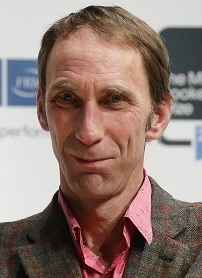 William Self is an English novelist, reviewer and columnist. He received his education at University College School, Christ’s College Finchley, and Exeter College, Oxford. He is married to journalist Deborah Orr.

Self is known for his satirical, grotesque and fantastic novels and short stories set in seemingly parallel universes. 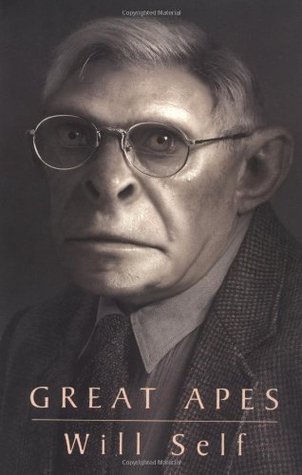 Fans of Will Self’s satirical fiction and stunning prose will not be disappointed in the latest from the author who brought readers through the bizarre war between the sexes in Cock & Bull and into the costly world of high-stakes business in My Idea of Fun. With Great Apes, Self takes readers into a sort of “Planet of the Apes” with a twist.
Simon Dykes is a London painter whose life suddenly becomes Kafkaesque. After an evening of routine debauchery, traipsing from toilet to toilet and partaking in a host of narcotics, the middle-aged painter wakes to discover that his girlfriend, Sarah, has turned into a chimpanzee. Simon is also a chimp, but he does not accept this fact—he is convinced that he is still human.

He is then confined to an emergency psychiatric ward and placed under the care of alpha-psychiatrist Dr. Zack Busner. Simon finds chimp behavior a bit unnatural; he can’t bring himself to use gestures rather than speech to communicate. He also finds it difficult to mate publicly or accept social grooming. Dr. Zack Busner—also a medical doctor, radical psychoanalyst, maverick axiolytic drug researcher, and former television personality—is prepared to help Simon get used to “chimpunity”. It is during Simon’s gradual simianization that Self’s true satirical genius shines, as he examines anthropology, the trendy art world, animal rights, and much more. 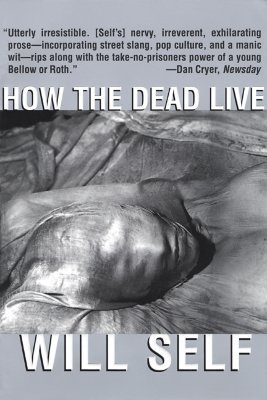 How the Dead Live

Will Self has one of literature’s most astonishing imaginations, and in How the Dead Live his talent has come to full flower. Lily Bloom is an angry, aging American transplanted to England, now losing her battle with cancer. Attended by nurses and her two daughters — lumpy Charlotte, a dour, successful businesswoman, and beautiful Natasha, a junkie — Lily takes us on a surreal, opinionated trip through the stages of a lifetime of lust and rage. From ’40s career girl to ’50s tippling adulteress to ’70s PR flak, Lily has seen America and England through most of a century of riotous and unreal change. And then it’s over. Lily catches a cab with her death guide, Aboriginal wizard Phar Lap Jones, and enters the shockingly banal world of the dead: the suburbs. She discovers smoking without consequences and gets another PR job, where none of her coworkers notices that she’s not alive. She gets to know her roommates: Rude Boy, her terminally furious son who died in a car accident at age nine; Lithy, a fetus that died before she ever knew it existed; the Fats, huge formless shapes composed of all the weight she’s ever gained or lost. How the Dead Live is Will Self’s most remarkable and expansively human book, an important, disturbing vision of our time.

Schadenfreude is so nutritious.

A creative life cannot be sustained by approval any more than it can be destroyed by criticism.

I’m an anarchist. I’m implacably opposed to heirarchical systems of power and control. I also mistrust crowds, as they often operate according to their lowest common denominator. In terms of evolutionary psychology, the crowd is very close to a herd of stampeding wildebeest.

Here we meet, on the page, naked and unadorned: shorn of class, race, gender, sexual identity, age and nationality.

How much more lonely and driven is the serial monogamist than the serial killer?

I’m going to end up like one of those old weirdos who lives in a network of tunnels burrowed through trash – yet I do not fear this.