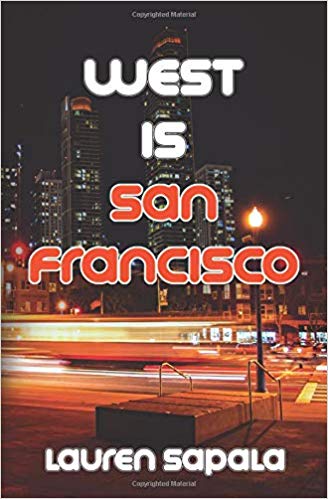 Book of the Month

West Is San Francisco is the second installment in Lauren Sapala’s West Coast Trilogy and the sequel to Between the Shadow and Lo, an addiction memoir in the gritty and hilarious transgressive fiction tradition of Chuck Palahniuk, Charles Bukowski, and Joshua Mohr.

When Leah lands in San Francisco, she’s hoping she can leave her past—along with her broken-down life in Seattle—behind. But what she can’t run from is her present reality as an alcoholic on the downward spiral, and the strong future possibility that she might die in the gutter. So, she quits drinking and resolves to live a new life, determined to be a better person and resist the siren song of addiction, staying a few steps ahead of her demons all the while.

But then Leah takes a job at a P.I. Firm and her resolve is thoroughly tested. Instead of alcohol, she becomes addicted to work and the nonstop demands of the agency. In a desperate attempt to break the cycle, she answers a mysterious online ad calling for writers and ends up working as an assistant to serial entrepreneur Scarlet Monroe, a woman who seems almost too good to be true, and like everything Leah has always wanted to be. But when Leah is hired as Scarlet’s personal assistant and gets in deeper with Scarlet and her cult-like company, the demons from her past come alive again, and this time they refuse to go away.

The sequel to Between the Shadow and Lo and the second installment in the West Coast Trilogy, West Is San Francisco is a surreal ride through the strange secrets—and intangible magic—of San Francisco.

A recent interview between Lauren and a fan:

Lauren: With all my books, I start by writing a VERY sloppy first draft and West Is San Francisco was no exception. I wrote down my memories of that time period of my life, pretty much just as I remembered them. I try not to pause too much while I’m actually writing and just grab the first words that come to mind. If I can’t grasp the exact words I want to use, I’ll settle for what’s immediately bubbling up in my brain and then insert brackets with a short note to myself to find a better word or phrase later. Sometimes, something like “botoxed scarecrow” (to describe a yuppie-type woman who is way too skinny and has had way too much plastic surgery) comes naturally during the first draft, but sometimes it doesn’t, and I have to go back over sentences again and again during revisions to carefully sculpt the descriptive phrases I want to use.

I do try to write fleshed-out scenes during the first draft stage, but I also often end up coloring scenes in later, adding detail, fleshing things out even more, etc. during subsequent drafts. I’m an intuitive writer, or what’s known as a “pantser” in the writing world, so I never have an outline of the plot to follow. I have no idea what the plot will be until I write it.

August: West Is San Francisco is even more surreal and dry-witted than Between the Shadow and Lo. What were your inspirations?

Lauren: I don’t know that I can point to any certain author or book that was the inspiration for West. Mainly, I just went through a series of intense experiences and I felt that I had to get them down on paper to process them within my own head. Every book I write is due to that same reason. Whether it’s autobiographical fiction (in the case of Between the Shadow and Lo and West Is San Francisco) or pure fiction, every book comes back to an important person in my life or set of experiences. It’s like I can’t understand my life until I turn it into story. West is no exception. I had to write the book to fully grasp why I chose to work for a sociopathic boss and how my dysfunctional personality is related to my addiction tendencies.

August: The flashback scene where Leah finally delves into memories of her mother’s, brother’s, and grandmother’s death was a long time coming. I was thrilled that Leah finally took us there with her. Since there was so much build up, was the flashback scene hard to write? Were you nervous? Did you have to rewrite it a few times to get it just right or anything like that?

Lauren: The flashback scene was INTENSE for me, since it’s mostly about my younger brother’s death from leukemia when he was six years old and I was eight. During the first draft, I had no problem writing it, but revisions were another story. It was brutal. And because that’s the nature of revisions, I had to go back over it again and again, and again. It was like a special kind of hellish exercise specifically designed to help me process that long-buried trauma. It worked though. Somehow, going over that scene so many times gave me the perspective and detachment I needed to finally move on from it.

And yeah, I think I rewrote the whole book at least seven times, that scene included.

August: Sal’s character was my favorite by far. He reminded me of John Malkovich in the movie Burn After Reading. As the book is autobiographical fiction, was Sal’s character based on a real person?

Lauren: Ha! “Based on a real person” doesn’t cover it. Every detail of Sal is recorded from real life. “Sal” was an extremely volatile, insanely exuberant huge Italian man who was a private detective himself and ran his own PI agency in San Francisco. I worked for him for almost three years. Sal is a case of “you can’t make this stuff up,” down to the actual dialogue used in the book. Sal was the easiest character for me to write, because I literally just wrote down things my old boss said and did and it formed itself into a story.

August: Speaking of autobiographical fiction, were you nervous about any negative reactions from people in real life that may have been in the book in some way? If there were negative reactions, how did you approach them?

Lauren: I think it’s impossible for any writer who is writing autobiographical fiction not to be nervous about negative reactions from the people in real life who are included in the book. In fact, when I released my first book, Between the Shadow and Lo, I was nauseous for a whole week as I imagined people reading it and freaking out. My approach to dealing with this was a bit odd maybe, but it worked. I contacted everyone who was in the book and who I thought might have a negative reaction and I sent them a copy myself. I figured I might as well pull the trigger on it and have it be my own doing rather than wait for them to find it on their own when I was least expecting it. And a funny thing happened: no one really had a negative reaction. In fact, the book reconciled me with a few people who I thought I had burned bridges with and that was pretty cool.

With West, I didn’t feel the need to track down any “characters” like I did with Lo. I think because I’m now somewhat desensitized to any negative reactions about my work. I have four books out and I get the whole spectrum of reactions to them quite frequently. Some people adore my work, and other people flat out hate it. I think every writer hits a point where you realize you just can’t invest any energy into the negative reactions. As a writer, you’ve got too much other shit to do.

August: My favorite part about West Is San Francisco is how meta it is. The story is self-aware. At times, it felt like a robot who had developed sentience. Was this intentional when you sat down to write it or did the story develop naturally like that?

Lauren: Well, it’s interesting, because I definitely didn’t try to do anything during the first draft. Like I said, I just sat down and wrote out everything I could remember and then worked with that. I wrote the book from 2009 to 2010 and then revised it many times up until about 2014, when I put it away in a drawer. Then I pulled it out again in 2017 with the idea of revising it one more time. As I read through it I finally saw the main pattern. All at once it dawned on me, “Whoa! This book is about death!” And not death as we usually think of it in our culture—something negative and tragic and fucked up—but death as transformation, and possibly even an ally. That’s when I was able to go back through and tease out the theme by adding more archetypes and symbols and specific language. I added the foreword to make it very clear to the reader, “Hey, here comes DEATH.” I added in descriptions of skulls and shrouds in unlikely places, and focused heavily on the storyline of my brother’s death and the death of one of the private detectives at the agency, and then the final scene revolves around the idea of suicide and how killing yourself (symbolically) might actually be a good thing. I wanted the reader to feel like I was clubbing them over the head with death at every turn. That was intentional. But the initial emergence of the death theme? Not at all. It was a total surprise to me.

Same thing with the meta element you noticed: the fact that Leah is obviously in a story, writing a story about her story, with people surrounding her who also have appeared to walk out of a story and are participating with her in her story, as it happens. I didn’t try to do that. It happened naturally. I just noticed it later during revisions and worked to bring it out even more.

August: Do you have any advice for young writers of transgressive autobiographical fiction? (This question is entirely self-serving).

Lauren: Write it. Write it no matter how scared you get. You’re going to be FULL of self-doubt. You’re going to seriously question yourself and what you’re doing and you’re going to read back over your writing and think it’s shit and that you are a piece of shit and that everyone is better than you. It’s not true. It’s just bullshit lies coming from self-deprecating thought loops in your head. What’s real is that you’re going to be dead someday and no one will really care what you did with your life so you might as well do something that means something to you and that is FUN. So if writing transgressive fiction is something that makes you feel passionate and curious and alive and challenged, DO IT.

And the more you do it, the easier it will get, on all fronts.