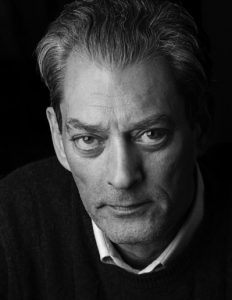 Paul Auster is the bestselling author of Report from the Interior, Winter Journal, Sunset Park, Invisible, The Book of Illusions, and The New York Trilogy, among many other works. He has been awarded the Prince of Asturias Prize for Literature, the Prix Médicis Étranger, the Independent Spirit Award, and the Premio Napoli. He is a member of the American Academy of Arts and Letters, the American Academy of Arts and Sciences, and a Commandeur de l’Ordre des Arts et des Lettres. He lives in Brooklyn, New York. 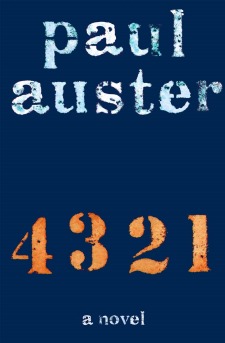 Astonishing, a masterpiece, Paul Auster’s greatest, most satisfying, most vivid and heartbreaking novel — a sweeping and surprising story of inheritance, family, love and life itself.

Nearly two weeks early, on March 3, 1947, in the maternity ward of Beth Israel Hospital in Newark, New Jersey, Archibald Isaac Ferguson, the one and only child of Rose and Stanley Ferguson, is born. From that single beginning, Ferguson’s life will take four simultaneous and independent fictional paths. Four identical Fergusons made of the same DNA, four boys who are the same boy, go on to lead four parallel and entirely different lives. Family fortunes diverge. Athletic skills and sex lives and friendships and intellectual passions contrast. Each Ferguson falls under the spell of the magnificent Amy Schneiderman, yet each Amy and each Ferguson have a relationship like no other. Meanwhile, readers will take in each Ferguson’s pleasures and ache from each Ferguson’s pains, as the mortal plot of each Ferguson’s life rushes on.

As inventive and dexterously constructed as anything Paul Auster has ever written, yet with a passion for realism and a great tenderness and fierce attachment to history and to life itself that readers have never seen from Auster before. 4 3 2 1 is a marvelous and unforgettably affecting tour de force. 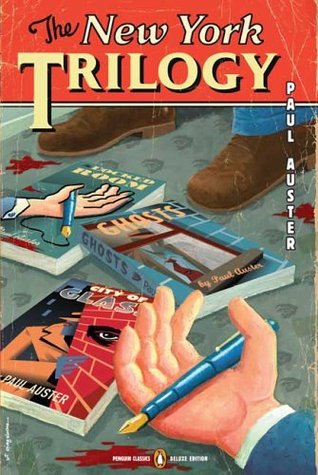 The New York Review of Books has called Paul Auster’s work “one of the most distinctive niches in contemporary literature.” Moving at the breathless pace of a thriller, this uniquely stylized triology of detective novels begins with City of Glass, in which Quinn, a mystery writer, receives an ominous phone call in the middle of the night. He’s drawn into the streets of New York, onto an elusive case that’s more puzzling and more deeply-layered than anything he might have written himself. In Ghosts, Blue, a mentee of Brown, is hired by White to spy on Black from a window on Orange Street. Once Blue starts stalking Black, he finds his subject on a similar mission, as well. In The Locked Room, Fanshawe has disappeared, leaving behind his wife and baby and nothing but a cache of novels, plays, and poems. 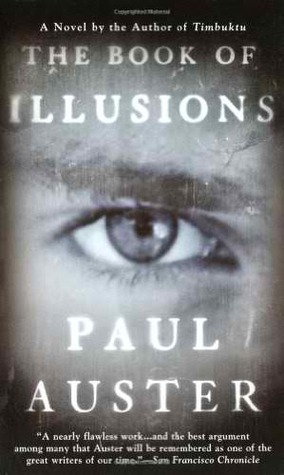 The Book of Illusions

Six months after losing his wife and two young sons, Vermont Professor David Zimmer spends his waking hours mired in a blur of alcoholic grief and self-pity. One night, he stumbles upon a clip from a lost film by silent comedian Hector Mann. His interest is piqued, and he soon finds himself embarking on a journey around the world to research a book on this mysterious figure, who vanished from sight in 1929.

When the book is published the following year, a letter turns up in Zimmer’s mailbox bearing a return address from a small town in New Mexico inviting him to meet Hector. Zimmer hesitates, until one night a strange woman appears on his doorstep and makes the decision for him, changing his life forever.

It always stimulates me to discover new examples of my own prejudice and stupidity, to realize that I don’t know half as much as I think I do.

When a person is lucky enough to live inside a story, to live inside an imaginary world, the pains of this world disappear. For as long as the story goes on, reality no longer exists.

Reading was my escape and my comfort, my consolation, my stimulant of choice: reading for the pure pleasure of it, for the beautiful stillness that surrounds you when you hear an author’s words reverberating in your head.

You can’t put your feet on the ground until you’ve touched the sky.

And that’s why books are never going to die. It’s impossible. It’s the only time we really go into the mind of a stranger, and we find our common humanity doing this. So the book doesn’t only belong to the writer, it belongs to the reader as well, and then together you make it what it is.

All men contain several men inside them, and most of us bounce from one self to another without ever knowing who we are.

You’re too good for this world, and because of that the world will eventually crush you.

The story is not in the words; it’s in the struggle.