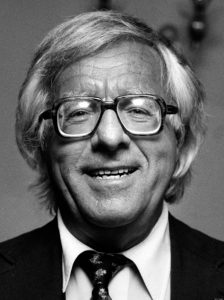 American novelist, short story writer, essayist, playwright, screenwriter and poet, was born August 22, 1920 in Waukegan, Illinois. He graduated from a Los Angeles high school in 1938. Although his formal education ended there, he became a “student of life,” selling newspapers on L.A. street corners from 1938 to 1942, spending his nights in the public library and his days at the typewriter. He became a full-time writer in 1943, and contributed numerous short stories to periodicals before publishing a collection of them, Dark Carnival, in 1947.

His reputation as a writer of courage and vision was established with the publication of The Martian Chronicles in 1950, which describes the first attempts of Earth people to conquer and colonize Mars, and the unintended consequences. Next came The Illustrated Man and then, in 1953, Fahrenheit 451, which many consider to be Bradbury’s masterpiece, a scathing indictment of censorship set in a future world where the written word is forbidden. In an attempt to salvage their history and culture, a group of rebels memorize entire works of literature and philosophy as their books are burned by the totalitarian state. Other works include The October Country, Dandelion Wine, A Medicine for Melancholy, Something Wicked This Way Comes, I Sing the Body Electric!, Quicker Than the Eye,and Driving Blind. In all, Bradbury has published more than thirty books, close to 600 short stories, and numerous poems, essays, and plays. His short stories have appeared in more than 1,000 school curriculum “recommended reading” anthologies.

Ray Bradbury’s work has been included in four Best American Short Story collections. He has been awarded the O. Henry Memorial Award, the Benjamin Franklin Award, the World Fantasy Award for Lifetime Achievement, the Grand Master Award from the Science Fiction Writers of America, the PEN Center USA West Lifetime Achievement Award, among others. In November 2000, the National Book Foundation Medal for Distinguished Contribution to American Letters was conferred upon Mr. Bradbury at the 2000 National Book Awards Ceremony in New York City.

Ray Bradbury has never confined his vision to the purely literary. He has been nominated for an Academy Award (for his animated film Icarus Montgolfier Wright), and has won an Emmy Award (for his teleplay of The Halloween Tree). He adapted sixty-five of his stories for television’s Ray Bradbury Theater. He was the creative consultant on the United States Pavilion at the 1964 New York World’s Fair. In 1982 he created the interior metaphors for the Spaceship Earth display at Epcot Center, Disney World, and later contributed to the conception of the Orbitron space ride at Euro-Disney, France.

Married since 1947, Mr. Bradbury and his wife Maggie lived in Los Angeles with their numerous cats. Together, they raised four daughters and had eight grandchildren. Sadly, Maggie passed away in November of 2003.

On the occasion of his 80th birthday in August 2000, Bradbury said, “The great fun in my life has been getting up every morning and rushing to the typewriter because some new idea has hit me. The feeling I have every day is very much the same as it was when I was twelve. In any event, here I am, eighty years old, feeling no different, full of a great sense of joy, and glad for the long life that has been allowed me. I have good plans for the next ten or twenty years, and I hope you’ll come along.” 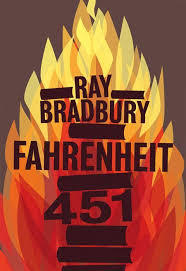 The terrifyingly prophetic novel of a post-literate future.

Guy Montag is a fireman. His job is to burn books, which are forbidden, being the source of all discord and unhappiness. Even so, Montag is unhappy; there is discord in his marriage. Are books hidden in his house? The Mechanical Hound of the Fire Department, armed with a lethal hypodermic, escorted by helicopters, is ready to track down those dissidents who defy society to preserve and read books.

The classic dystopian novel of a post-literate future, Fahrenheit 451 stands alongside Orwell’s 1984 and Huxley’s Brave New World as a prophetic account of Western civilization’s enslavement by the media, drugs and conformity.

Bradbury’s powerful and poetic prose combines with uncanny insight into the potential of technology to create a novel which, decades on from first publication, still has the power to dazzle and shock.

You must stay drunk on writing so reality cannot destroy you.

If you hide your ignorance, no one will hit you and you’ll never learn.

We are cups, constantly and quietly being filled. The trick is, knowing how to tip ourselves over and let the beautiful stuff out.

Learning to let go should be learned before learning to get. Life should be touched, not strangled. You’ve got to relax, let it happen at times, and at others move forward with it.

You don’t have to burn books to destroy a culture. Just get people to stop reading them.