Paul Neilan is an American novelist, writer of Apathy and Other Small Victories. 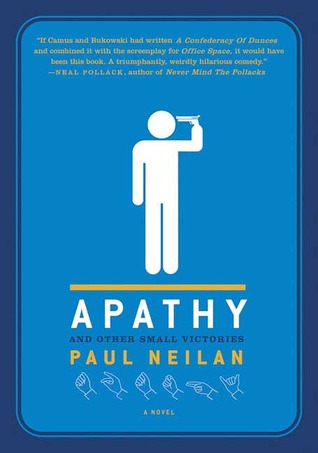 Apathy and Other Small Victories

The only thing Shane cares about is leaving. Usually on a Greyhound bus, right before his life falls apart again. Just like he planned. But this time it’s complicated: there’s a sadistic corporate climber who thinks she’s his girlfriend, a rent-subsidized affair with his landlord’s wife, and the bizarrely appealing deaf assistant to Shane’s cosmically unstable dentist.

When one of the women is murdered, and Shane is the only suspect who doesn’t care enough to act like he didn’t do it, the question becomes just how he’ll clear the good name he never had and doesn’t particularly want: his own.

It takes more than one kick in the pants to reverse a lifetime of unplanned apathy.

And when they start talking, and they always do, you find that each of them has a story they want to tell. Everyone, no matter how old or young, has some lesson they want to teach. And I sit there and listen and learn all about life from people who have no idea how to live it.

If stealing a few saltshakers was wrong I didn’t want to be right.

Sitting on my stool I thought of a bumper sticker: “If Mean People Suck, Why Isn’t My Dick In Your Mouth?

It’s like someone who prays every night saying God’s a good listener. Just because you’re talking to us doesn’t mean we’re listening. With me and God, you never really know.

Nobody knows how to just shut the fuck up and look out the window anymore.

Whenever I’m leaving I get sentimental for that nostalgia I know I won’t have the next day.

The world is your oyster…
…too bad you’re allergic to shellfish.