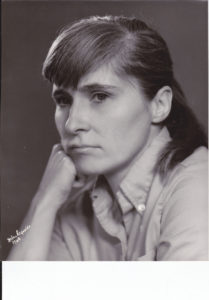 Jody Scott (Jan 13, 1923- Dec 24, 2007 ) was an award-winning American writer whose novels garnered extensive critical and peer acclaim though most of her works remained unpublished during her lifetime. Scott was a satirist who employed speculative and mainstream fiction to critique society and question the nature of reality. Her scifi series The Benaroya Chronicles (consisting of the novels Passing for Human, I, Vampire and Devil-May-Care) became cult classics of feminist satire in the 1980’s and were widely praised for their hilarity and originality. 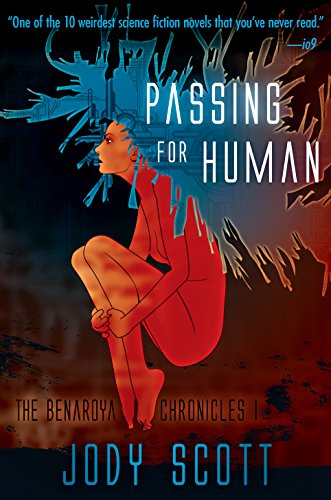 When a dolphin-like alien comes to Earth disguised in a female human body, it sets the stage for a wild feminist romp that outstranges Stranger in a Strange Land. “The pace of the story never lets up, yet it finds room for serious contemplation of humanity’s woes. The style is easy, with an edge of noir. The central character is a bit of a tough girl which, mixed with her naivety about humans, makes for an intriguing and likeable character. Especially as she (in common with the other aliens) inhabits bodies she has chosen from Earth culture – Brenda Starr, Emma Peel, and Virginia Woolf. Who could not like that, especially the final scenes in which Virginia Woolf is involved in a running gun battle.

A prime test for madness and paranoia is called ‘insurance.’ If a species has ‘insurance,’ it is patently doomed. Only a toylike, salivating, pent-up bunch of gruntlings could conceive of such a sociopathic type of gambling.

How do you explain a zen parable, how explain a mind-bendingly unconventional but logistically correct view of ‘reality’ in a story? I just try everything I can think up and sometimes it works, sometimes it doesn’t