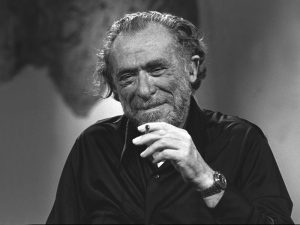 Henry Charles Bukowski (born as Heinrich Karl Bukowski) was a German-born American poet, novelist and short story writer. His writing was influenced by the social, cultural and economic ambience of his home city of Los Angeles.It is marked by an emphasis on the ordinary lives of poor Americans, the act of writing, alcohol, relationships with women and the drudgery of work. Bukowski wrote thousands of poems, hundreds of short stories and six novels, eventually publishing over sixty books

Charles Bukowski was the only child of an American soldier and a German mother. At the age of three, he came with his family to the United States and grew up in Los Angeles. He attended Los Angeles City College from 1939 to 1941, then left school and moved to New York City to become a writer. His lack of publishing success at this time caused him to give up writing in 1946 and spurred a ten-year stint of heavy drinking. After he developed a bleeding ulcer, he decided to take up writing again. He worked a wide range of jobs to support his writing, including dishwasher, truck driver and loader, mail carrier, guard, gas station attendant, stock boy, warehouse worker, shipping clerk, post office clerk, parking lot attendant, Red Cross orderly, and elevator operator. He also worked in a dog biscuit factory, a slaughterhouse, a cake and cookie factory, and he hung posters in New York City subways.

Bukowski published his first story when he was twenty-four and began writing poetry at the age of thirty-five. His first book of poetry was published in 1959; he went on to publish more than forty-five books of poetry and prose, including Pulp (1994), Screams from the Balcony (1993), and The Last Night of the Earth Poems (1992).

I don’t hate them…I just feel better when they’re not around.

I’ve never been lonely. I’ve been in a room — I’ve felt suicidal. I’ve been depressed. I’ve felt awful — awful beyond all — but I never felt that one other person could enter that room and cure what was bothering me…or that any number of people could enter that room. In other words, loneliness is something I’ve never been bothered with because I’ve always had this terrible itch for solitude. It’s being at a party, or at a stadium full of people cheering for something, that I might feel loneliness. I’ll quote Ibsen, “The strongest men are the most alone.” I’ve never thought, “Well, some beautiful blonde will come in here and give me a fuck-job, rub my balls, and I’ll feel good.” No, that won’t help. You know the typical crowd, “Wow, it’s Friday night, what are you going to do? Just sit there?” Well, yeah. Because there’s nothing out there. It’s stupidity. Stupid people mingling with stupid people. Let them stupidify themselves. I’ve never been bothered with the need to rush out into the night. I hid in bars, because I didn’t want to hide in factories. That’s all. Sorry for all the millions, but I’ve never been lonely. I like myself. I’m the best form of entertainment I have. Let’s drink more wine!

You have to die a few times before you can really
live.

The problem with the world is that the intelligent people are full of doubts, while the stupid ones are full of confidence.

My ambition is handicapped by laziness

Some people never go crazy. What truly horrible lives they must lead.

Sometimes you climb out of bed in the morning and you think, I’m not going to make it, but you laugh inside — remembering all the times you’ve felt that way.

I wanted the whole world or nothing.

We’re all going to die, all of us, what a circus! That alone should make us love each other but it doesn’t. We are terrorized and flattened by trivialities, we are eaten up by nothing.

For those who believe in God, most of the big questions are answered. But for those of us who can’t readily accept the God formula, the big answers don’t remain stone-written. We adjust to new conditions and discoveries. We are pliable. Love need not be a command nor faith a dictum. I am my own god. We are here to unlearn the teachings of the church, state, and our educational system. We are here to drink beer. We are here to kill war. We are here to laugh at the odds and live our lives so well that Death will tremble to take us.